There’s ice cream, and then there’s ice cream. Movenpick ice cream, an internationally renowned Swiss brand, definitely belongs to the latter category… the superb, oh my god I’m in heaven category. The ice cream available at the Movenpick Hotel in Bangalore is imported; yes, the stuff comes straight from Switzerland, and right now, there are six flavors to choose from. If the name sounds familiar, there are ice cream parlors in other cities, including Chennai, but the offering at the hotel is the ice cream’s Bangalore debut.

I’ve been having a hellish few weeks at work, and well, life in general has been less than fun. So don’t judge me when I say I would have happily drowned in a bathtub full of the vanilla or strawberry flavors. This is ice cream at its very best, the way its supposed to be… creamy and perfectly smooth. There’s a handful of flavors, with more coming soon. But its a fabulous start and you can dive into Vanilla Dream, Strawberry Symphony, Royal Chocolate, Cappuccino, Maple-Walnut, and Stacciatella. The last, Stacciatella, is quite lovely, a panna ice cream with chocolate chip chunks.

The Royal Chocolate was really chocolatey, very rich and dark, as was the Cappuccino – a strong burst of coffee, something I am sure coffee lovers will be ecstatic over. The Maple-Walnut was everything its name promised – walnut pieces and maple syrup goodness in a rich and creamy ice cream. The standouts were, believe it or not, the Strawberry Symphony and Vanilla Dream. In a way, I think that says all that needs to be said about the quality and attention to detail of the brand. If you can elevate the kiddie flavors and take them from common place to extraordinary, then surely the fancier stuff will be everything one can hope for.

Ed: Considering I know Natasha *hates* coffee, she probably decided how well flavored the coffee ice cream was, based on how intensely she disliked it.

The vanilla was vanilla bean, with its unique, stronger than plain ol’ vanilla taste, indeed the creme de la creme of vanilla. The strawberry was just, wow! And that was pretty much the general consensus, not just mine. It had the requisite tartness and I happily succumbed to temptation and dove into a second bowl. All the portions were served with a garnish – the most luscious and crunchy pirouette cookies I’ve had – and seeing that I am a fan of this genre of cookie, and have eaten it often and from both the US and Europe, that’s saying something. 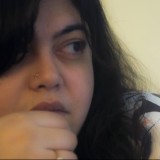